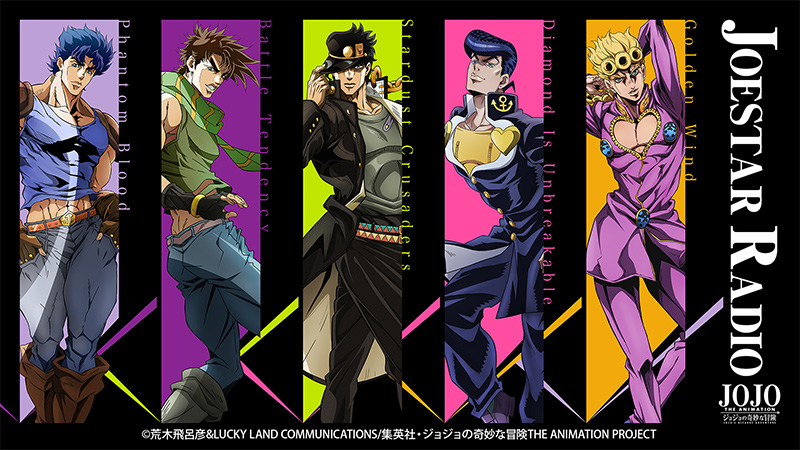 As a warm-up prior to the upcoming event “JoJo’s Bizarre Adventure: The Animation Special Event ~JOESTAR the inherited soul~” which is scheduled April 4 2021, web radio project “JOESTAR RADIO” will be airing from November 2020! Main casts in the previous series will be hosting the program, and along with special guests they will look back on each of the animated “JoJo’s” series every month.

The November episodes will be hosted by both Kazuyuki Okitsu (voice of Jonathan Joestar) and Yoji Ueda (voice of Robert E. O. Speedwagon).

Streaming will start November 8 2020 on the warnerbrosanime official YouTube channel.
New episodes will then be released every Sunday (No releases on January 3).

Internet radio station “Onsen” will be streaming from November 9 2020.
New episodes will then be released every Monday (No releases on January 4).

Tell us what you think about JoJo’s Season 1 ~ Season 4!
Write to each of the hosts and your message might be read out on the show.
*Please only send messages regarding the “JoJo’s Bizarre Adventure” animation series.

A few topics about JoJo’s will be provided. The hosts will choose one and discuss about it.

We are collecting Best Scenes for characters throughout the animation series.
Please let us know which scene featuring which character is the best, and tell us why you think it’s awesome!

Apply for “Comments & Reviews” and “JoJo’s Bizarre Adventure Best Scenes” by sending an email through the following address:
https://www.onsen.ag/program/jojo

*The ”About JOJO” segment is not open for email applications.